Australian housing finance is booming – but can it continue? 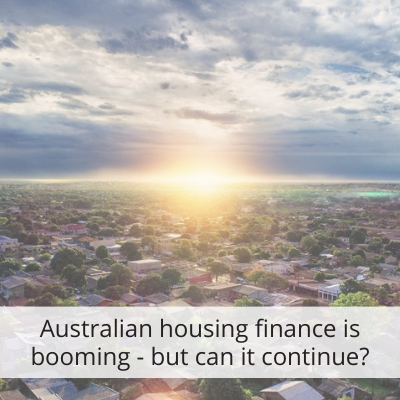 Loan commitments for houses have reached record highs as Australians take advantage of low-interest rates and homebuyer incentives. But is this momentum sustainable?

According to figures from the Australian Bureau of Statistics (ABS), the total value of new loan commitments for housing and within that, the value of owner occupier home loan commitments has reached record highs.

Some key figures include:

The surge in housing finance, like the rebound in home prices, is being driven by a combination of a few factors. This includes record-low mortgage rates, home buyer incentives and economic recovery.

It also seems consistent with further gains in house prices ahead, as these loans are drawn down and listings remain relatively low

Right now, the rate of growth in total housing related debt is modest – with RBA credit data for housing debt showing a rise of 0.4% in December and 3.5% year on year – because existing borrowers are focused on rapidly paying down debt and the housing finance commitment data leads the flow of new credit with a lag.

However, the RBA is likely to be starting to get a bit more concerned given the pace of the rebound in lending commitments and house prices, albeit it’s not that concerned at this stage as there is not much evidence of a deterioration in lending standards yet.

At the very least, it would make sense for home borrower incentives to be wound back in the months ahead and not extended.

If housing credit growth accelerates significantly, we think we may see a renewed tightening in lending standards by year end or early next year.

As was the case a few years ago, tighter lending standards rather than rate hikes are likely to be the RBA’s preferred path at least initially as it will likely remain premature for the RBA to start raising interest rates or ending bond buying entirely, considering continuing uncertainty and spare capacity in the wider economy at least out to the end of next year.